Evolution of Life in the Sea

Current Status : Moved to this location in November 2009 and is still there in 2014 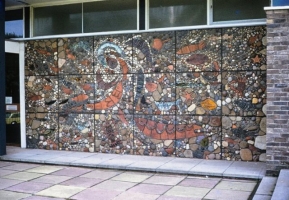 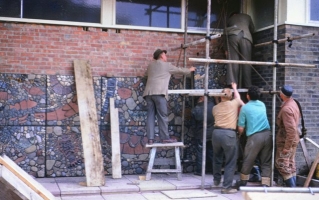 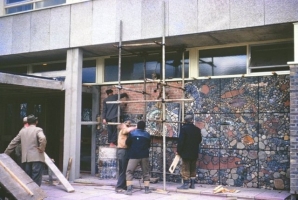 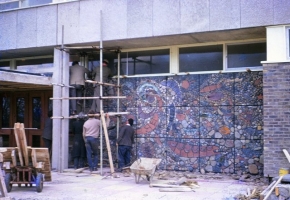 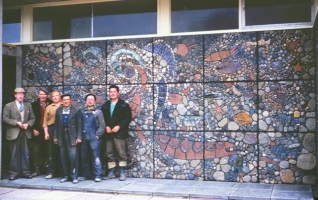 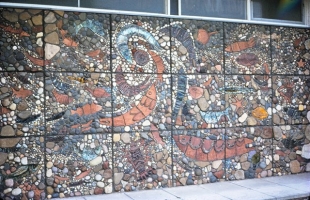 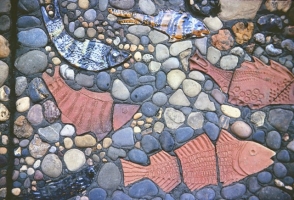 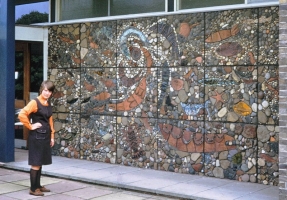 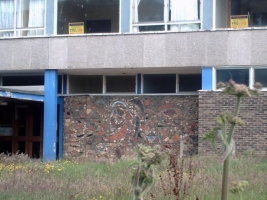 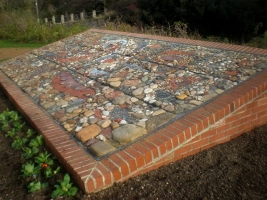 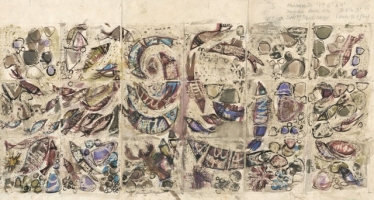 In 1962, soon after I started teaching, I had done a conventional ceramic mural painted on tiles 'The Hermit', for a pub in Sheffield. This was unremarkable but when submitting the design I offered an alternative with the figure of a hermit modelled in ceramic in rich relief. Some months later Bob Adams, one of the partners at the architects Hadfield, Cawkwell and Davidson, wrote asking me if I might consider producing a design for a new school. He wanted me to work in the idiom of the second of my two designs for the Hermit: working in modelled and textured clay. He suggested that I might like to incorporate some local stone because the mural was to be for Rosecroft School in Loftus on the North Yorkshire coast, where the beaches contain a wonderful variety of stones and fossils. I suggested a mural with fishes leaping up in a kind of spiral, which I called 'Evolution of life in the Sea'. The design was accepted. When I began working into the clay, I was cutting the larger fish into pieces using straight lines. Looking at the mural it is possible to see how my technique developed as I worked. I discovered that I could cut up the larger shapes into decorative and sympathetic shapes and that these would, if carefully dried, shrink in sympathy with each other. The clay pieces were dried, fired, glazed and transported to Yorkshire. The children who were about to attend the new school had been encouraged to collect fossils and stone from their local beaches. I collected some pebbles myself but most of the work was done by the children. I spent two weeks arranging my ceramic pieces with the stone and pebbles and placing them into a layer of cement render which had been applied to the surface of pre-formed concrete blocks. The resulting blocks were very heavy, and it required a pulley and several men to hoist them into position. In 2009, this mural was in jeopardy. The school, newly built in 1963, had been closed and the pupils moved to a different site. The building was scheduled for demolition and the mural might well have been destroyed. But two enthusiastic residents and town councillors, Barry Hunt & Tom Evans wanted to save the mural. During 2009 it was removed from the building and moved to Doorstep Green Park in Skinningrove. With many of the children who took part in its making still living in the area (grandparents now) it is especially good that the mural’s future is now assured.