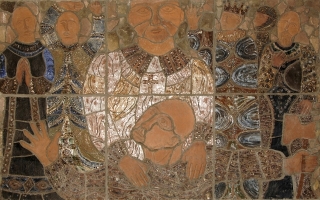 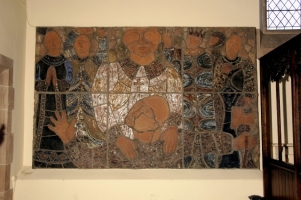 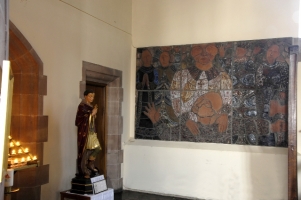 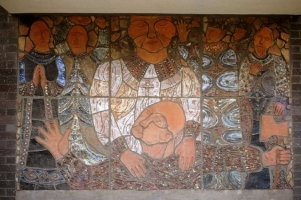 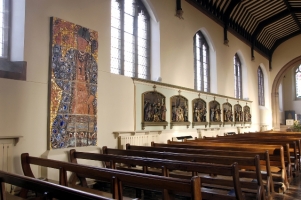 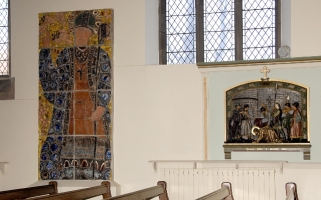 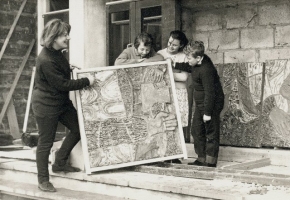 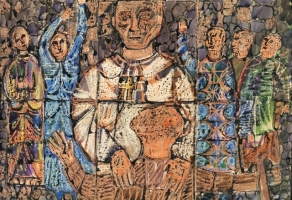 The murals were made for St. John Fisher Roman Catholic Secondary School in Sheffield. They contain two different scenes about St John Fisher, who was executed by King Henry VIII during the English Reformation. There were two large panels, with one to go on either side of the main entrance. I designed the panels to contain two different scenes about St John: on earth and in Heaven. On the left hand side of the main school entrance was a panel with a larger than life size figure of St. John in Heaven (as seen above.) He is seen with the halo that signifies that he is a saint, but holding his crosier which was the symbol of his office as a bishop when he was on earth. Behind him are richly glazed pieces of yellow ceramic forming a kind of golden mosaic. It was apparently traditional for saintly persons about to be executed to bless their executioner. St John was beheaded for his beliefs, and in the panel on the right of the doors (as shown beneath) he is seen just before his execution. He is blessing the executioner as he kneels ready for the axe to strike. I modelled the figures of St. John and the executioner on a great scale, with their heads measuring about 3 feet across. On a smaller scale and standing detached behind him are various figures representing the churchmen and soldiers who, as I perceived it, had connived at his death. The school is now a Fire Service Training Centre, but I have established that the murals were moved in the middle eighties to St. Joseph’s RC Church in Handsworth, Sheffield.