Location : On outside wall of NLC School 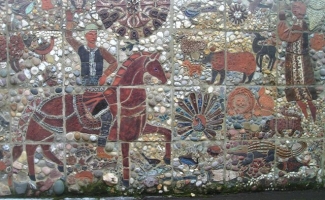 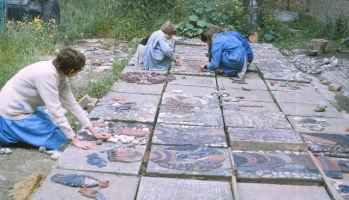 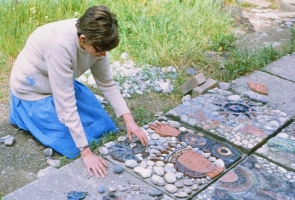 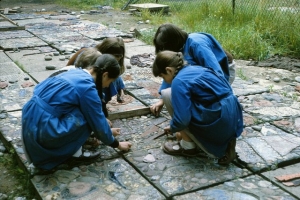 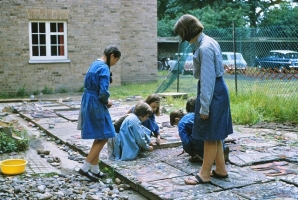 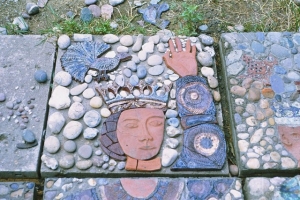 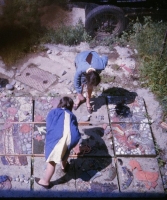 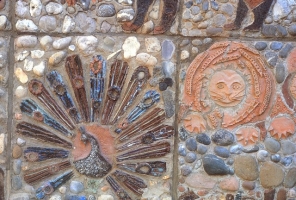 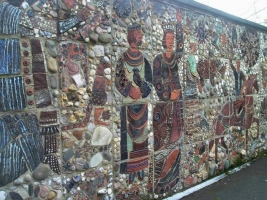 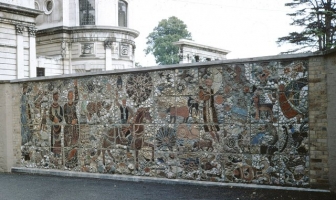 The mural was produced by students whilst I was teaching art and pottery at the school. Dame Kitty Anderson, the head mistress, had seen my mural using ceramic and stone at Loftus, 'Evolution of life in the Sea'. She had the idea of commissioning a similar mural for the school, with the girls working under my direction. The following is taken from a piece that I wrote for the SEA (Society for Education through Art) for their September 1966 Bulletin. 'The whole design was to be the children’s responsibility. During the summer of 1964 all 850 members of the school were asked to collect at least 10 stones each during their summer holiday. We had stones in sack-fulls from Cornwall, and individual stones carefully wrapped in tissue paper from Iona and Mount Zion. The pile grew and grew.' 'It was a problem to think of a subject which wasn’t merely decorative. Eventually the idea came of a theme that would give the children a real sense of involvement: a psalm of praise.' “Praise ye the Lord...all his angels, praise Him all His hosts...praise the Lord from the earth ye dragons and all deeps....beasts and all cattle, creeping things and flying fowl...kings of the earth and all people...let them praise the name of the Lord...” (Psalm 148). 'This would appeal to both Christian and Jewish children in the school. We had a big sun symbolising God the Divine Power, with everything converging on it - flying, swimming, crawling, and walking. As well as being a spiritual core, this was a great help aesthetically: the sense of movement towards the centre unified the whole.' 'The idea of this focal point was mine but apart from this the whole grew logically and inevitably. If a group of 14 year olds wanted to help, I explained that they could make an angel or a crocodile. They would set to, usually working directly in clay. I might add that many of them had already done some textured tiles because I always introduced the first year (Year 7) to clay with this process. As the mural grew, we had to be more specific and senior students were commissioned to make particular figures: the sun, the king and queen, the knight on horseback. Only the 10-year olds worked in class. All the other age groups worked in dinner breaks and in their own time. I wanted the work to be done only by those who were really interested.' 'Textures and patterns were impressed from the great variety of tools and seals that we had collected and made throughout the years. The re-appearance of a particular imprint on a king’s crown, a hedgehog’s prickle and a cock’s comb gave unity to the variety of styles. The work of 18 year olds and 10 year olds can be uniquely unified in this medium. Glazes were applied by the children experimenting with oxides and various basic glazes, and occasionally with melted glass.' 'The ceramic pieces were all finished by summer 1965. A local builder had made concrete blocks with a scored surface to specific measurements. The girls themselves mixed the sand and cement, arranged the shuttering round each block and sank the ceramic and pebbles into the bed thus prepared. Choosing the stones and pebbles and arranging them to form the background is always exciting and many different groups of children were involved in this stage.' 'More or less free standing, the blocks were tied back to an existing wall with copper rivets.' The mural is still standing over 40 years later. It has not changed one bit since that first day when the children grouped around to see their work on the wall at last. From time to time, I receive emails and contact from people who remember taking part in the making. Several have had children attend the school where they know their mother took part. Makers of crocodile, angel and fish are now grandmothers.