We know very little about this mural as we have no documentation from those early days. I found several articles mentioning that this building had been gutted and so it is very likely that this mural has gone. 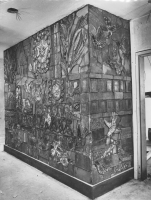 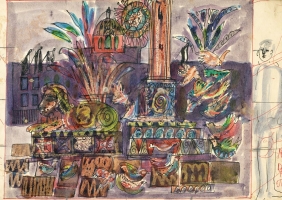 I was commissioned to do this mural for a company called Mineral Separation which had its head offices in Queen Annes Gate in central London. The internal wall was in a fairly narrow corridor and continued around a corner at right angles. I chose the theme Trafalgar Square and I remember going out and drawing in Trafalgar Square with the lions and pigeons before starting on the modelling work.

The erection was different in that this time a craftsman applied plaster to the wall in layers and I impressed the ceramic pieces into the wet surface before it dried. When the two foot layer of plaster had dried we progressed to the next layer up the wall and so on to the top of the mural.

The fountains were depicted with lozenges of glazed ceramic and the pigeons could fly free in the sky against the plaster background.