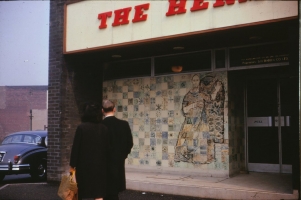 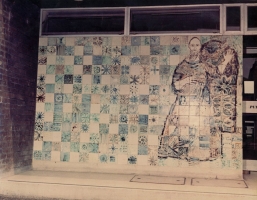 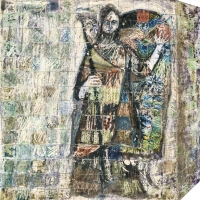 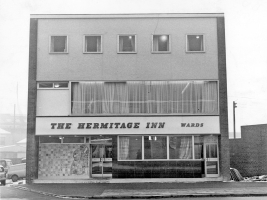 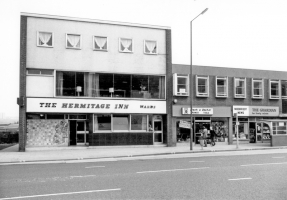 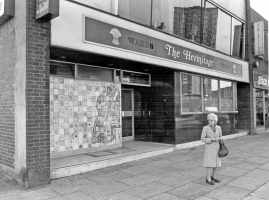 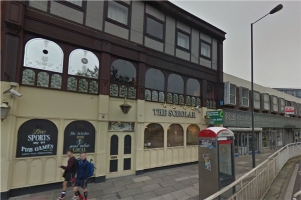 This was the first public commission that I ever did. It is not a work of which I am at all proud but it really was the beginning of my career as a maker of ceramic murals. Chance played a strange and amazingly lucky part in this.

My cousin Caroline, with whom I was sharing a flat in London, had a brief friendship with one Mr Wright whose father ran a chain of pubs in the Derby / Sheffield area. We used to refer to him merrily as Mr Right. One day he told my cousin that they were building a new pub in Sheffield and were thinking of having some sort of mural to decorate the frontage onto the street. I don’t think that Caroline had ever seen an example of my ceramic work but nevertheless she suggested that perhaps I could do something for them. "My cousin is an artist and she works in clay; I am sure she would make a lovely mural for you!"

The pub was to be called The Hermitage, and I drew out two different designs for the eight foot high mural. One was of a hermit painted in coloured glazes on white tiles, and the other design suggested a figure made in textured and modelled slabs of terracotta with minimal glazing. It being the early sixties it wasn’t surprising that they chose the painted tile design. I found a source of frost proof white tiles, painted them with my newly invented glazes and fired them all in the kiln at North London Collegiate School where I was teaching at the time. The tiles were shipped up to Sheffield and I must have visited the site at some point because I have a photograph of it. I don't remember doing so.

The mural now looks dated: very much of the sixties era. It could easily have been the beginning and end of my mural career. The strange and amazingly lucky thing was that Bob Adams, one of the partners of the architectural practice Hadfield, Cawkwell and Davidson, had seen and obviously liked the ideas behind my alternative design. Some months later he wrote and asked me to design a mural, in similar modelled and textured ceramic, for a school in the West Riding of Yorkshire. He suggested that I mix the ceramic with natural stone. My design was accepted and this was to become my particular medium. (See ‘Evolution of Life in the Sea’ 1963) I never again painted onto tiles.

And all because Cousin Caroline met Mr Right!