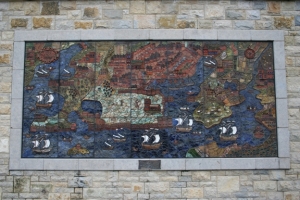 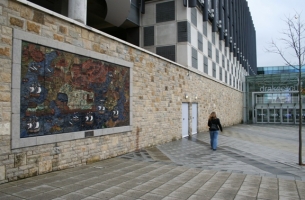 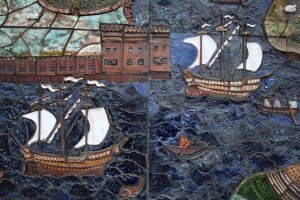 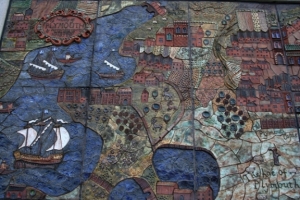 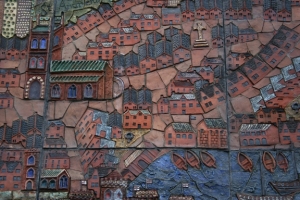 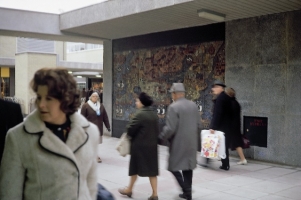 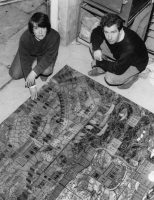 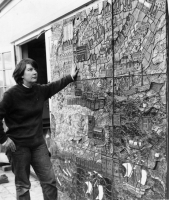 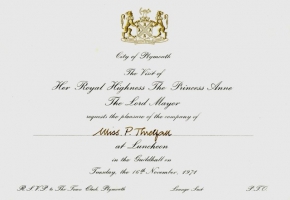 Medieval maps, with rich and quirky detail and the houses shown in elevation were a favourite source of inspiration for Philippa and Kennedy's murals over the years. Each small house was made as a separate piece of ceramic, building up a mosaic-like quality. Churches always featured, usually the only recognisable feature to survive to present times. Church windows were usually filled with melted red, blue or green glass - forming focussed points of colour amongst soft tones of the houses. Fields were treated as pattern, with texture and glazes giving rich variety and as on the original maps; the descriptive captions were woven into the design. The design is based on different maps: the Henry VIII map of Plymouth, now in the British Museum, and later maps of the city by Donn and Gomme. The mural shows buildings and churches, and sheep grazing on the Hoe. Fortifications were very important to this 16th century naval base. A chain stretched from side to side of the river and could be raised when the enemy approached, and this is shown together with galleons sailing in the harbour. Small ferry boats ply their trade and. The mural was commissioned by Lacing Development and originally it was sited in an underpass beneath Drake Circus. The mural was officially unveiled by HRH Princess Anne in 1971. It was removed from this position when the old site was demolished, and resited early in 2007 at the Cornwall Street entrance of the new Drake Circus shopping centre.