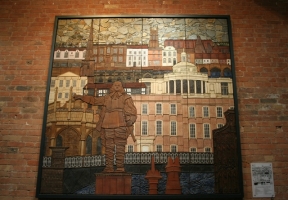 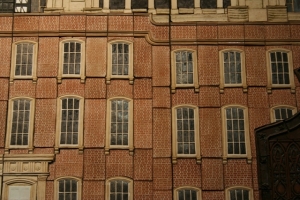 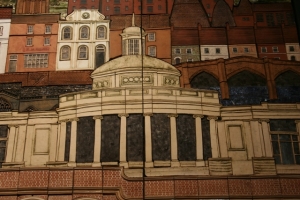 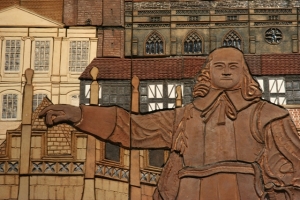 The mural was commissioned by the Bridgwater Building Society in 1975. Measuring 8' x 8' the mural was to go in the Society’s Head Offices. Many people think of Bridgwater as an industrial centre, but it has a number of distinguished buildings. As always when designing these building murals, we spent some time in the town looking around - talking to the local museum curator – getting a feeling for the place – taking photos and making notes. Then, using photographs and drawings we would make and submit the design. We incorporated into the mural eminent local landmarks together with more unusual details. The mural contains a section of Castle Street, with its splendid unusual Georgian brick facade and a statue of Admiral Blake, Bridgwater’s most famous son. (He was an Admiral serving at the time of Oliver Cromwell.) In the 19th and early 20th centuries Bridgwater was famous for brick making. We included decorative chimney pots from the museum, together with the bottle kilns which would have been used when the industry flourished. The Glass House at top right is similar in shape to the 'bottle shaped' pottery kilns, but would have been used for firing glass. The Old High Cross is no longer here, but is very like other market crossed still found in Somerset. Although these buildings had been demolished they can still be remembered in the form of the mural. After some years the Bridgwater Building Society was absorbed into another Building Society which no longer needed offices in the town. For many years the mural was in Sedgmoor District Council offices. At the suggestion of the local Civic Society it is now displayed in the refurbished Cornhill Market Building. A drawing identifies the various buildings so that passers by can remind themselves of Bridgwater's rich heritage.