We have no idea where this has gone. This is the mural that Philippa is most proud of and she would love to hear from anyone who might know of its whereabouts. 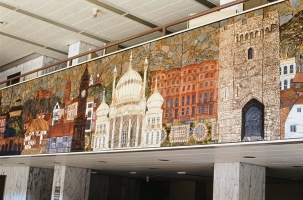 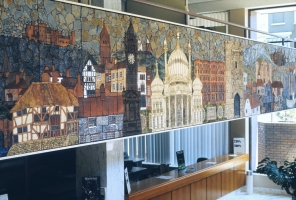 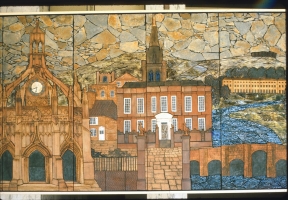 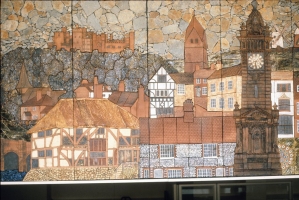 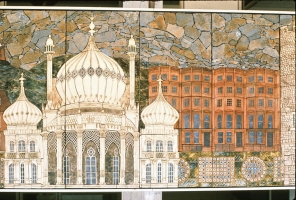 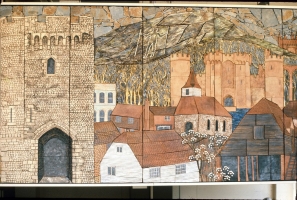 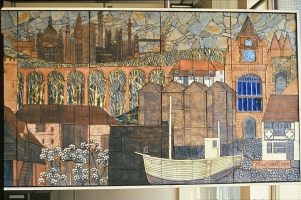 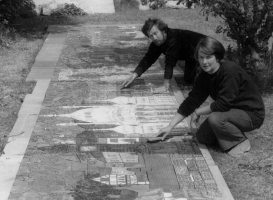 This mural was commissioned by the Sussex Mutual Building Society for their new head offices in Hove. It was to run along the front of a mezzanine floor and would be seen both from inside the offices and from the street outside, through plate glass windows. This was a large and exciting commission for us and we researched it carefully. We spent a week driving about the county of Sussex, discovering the features that we wanted to include and carefully photographing them. We drew up the design and submitted it to the clients. The concept was to imagine that the observer is out at sea and seeing the buildings of Sussex spread out in front of them from left to right - west to east. Starting on the west side with notable features from Bosham and Chichester, we suggested showing buildings from across the county. The mural was to include both famous landmarks such as terraces from Hove and Brighton Pavilion and, more intimately, vernacular cottages and barns. The mural was to end to the east with fish huts from Hastings and various features from the Cinque Port of Rye. The design was accepted and we began work in earnest. Each building was modelled up using our references. When researching for a mural of this type, we always liked to take the photographs ourselves. This is because professional photographers tend to take photos with an artistic eye. They usually take shots at an angle or with some foreground detail interrupting the whole to add interest to the finished image. This does not make for a good reference for me because what I want is to see is a simple elevation from which I can work. I worked into the clay with this attached to thick polystyrene sheets and set up on an easel. Then, working on the floor of our studio, Kennedy cut each building or feature into the one behind to make up the collage. Small details provided interest and intimacy: Chanctonbury Ring and Jack and Jill windmills appear on the horizon; patterned flower beds represent the formal gardens of Brighton and Hove; London is seen in silhouette on the skyline and simple cow parsley appears in front of two different Sussex barns. The South Downs run along behind throughout and the sky, made up of a mosaic of slate pieces, unites the whole. The normal processes of glazing and assembly took place over the next few months and we went to Hove to erect the mural panels. My son Daniel (now my business partner in Black Dog) was in those far off days a small toddler. He had to accompany us because my mother was ill and could not have him to stay. The offices were nearly complete and he could not be allowed to wander about. He was far too old for a play pen but goodly stayed in one throughout the time we were clambering about at mezzanine level screwing the panels back to the wall. I remember that old ladies seeing him through the plate glass windows were waving to him as he happily waved back: a good early introduction to customer relations. This was one of the most successful of our murals in this idiom. The Society produced a brochure with a drawing which I did for them naming the different buildings and features. It was for many years an important feature of their head offices.

Eventually, the Sussex Mutual was taken over by the Portman Building Society. The Portman BS wanted to move their head offices to Bournemouth in Hampshire and the mural, being all about Sussex, now lacked pertinence. From correspondence in November 2014 with a past employee of Portman, we have established that there was a plan to move the mural to the new Portman House headquarters. However, this did not happen and there is a suggestion that it could be in storage at a warehouse in Bournemouth. In 2007, the Portman BS was itself taken over by the Nationwide Building Society.