Location : Currently at our workshops in Wells

Current Status : In October 2015 we rescued the mural before refurbishment of 114-116 Aldates Street, Oxford, OX1 1BD 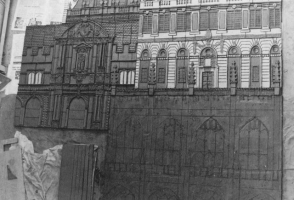 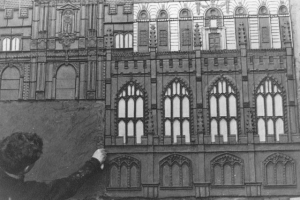 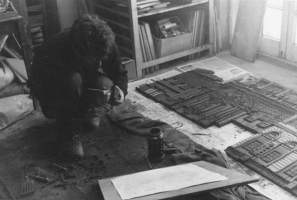 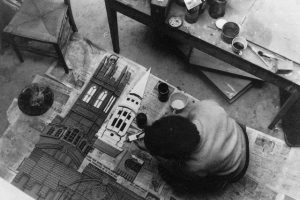 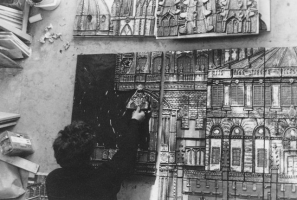 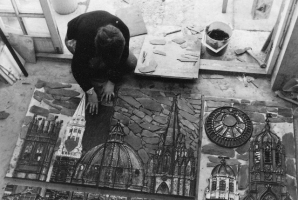 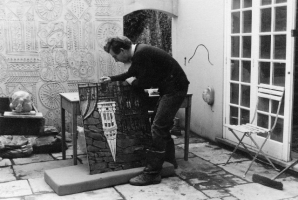 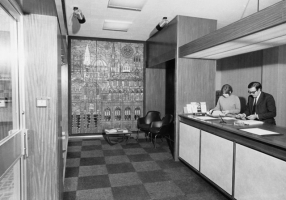 Throughout the seventies, Kennedy and I were commissioned by Bradford and Bingley Building Society to design and make murals for their different high street offices. In nearly all cases we tried in our designs to reflect the character and history of the particular area. The Oxford mural was the first that we did for the Society, and the first building mural on which we worked together. We designed a mural which consisted of a collage of buildings showing some of the famous buildings of Oxford University including the Sheldonian Theatre, Christchurch Cathedral, the ornate gate to St John’s College and the fabled Spires of the city. It is modelled in bold relief. We were still working out our various techniques and the mural had little of the repeating elements that we subsequently used. We melted coloured glass onto the church windows and used slate in the sky. This was not the rusty/grey slate obtained from a worked-out Cornish slate quarry which we came to use late on, but darker grey/black slate from Wales (Broken roof tiles, I think!)

In 1992 the branch office was moved but the mural followed it and was re-sited to new offices based at 114-116 Aldates Street in Oxford. The building is to be refurbished and it is not clear if the mural will be required there in the future. Whilst rescuing it in October 2015 we spotted a little note behind it saying PT and JKC re-sited the mural here in 1992.