Current Status : In October 2014 we have established that the mural is still located in the Crossflatts offices. Unfortunately, the mural is not visible to the public. 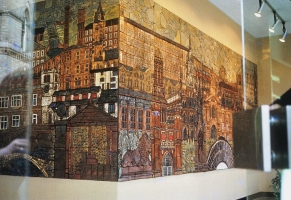 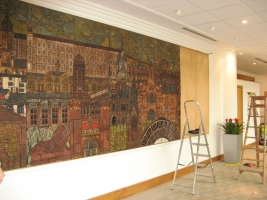 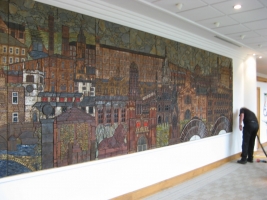 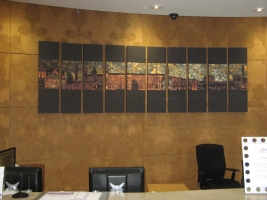 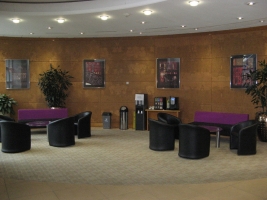 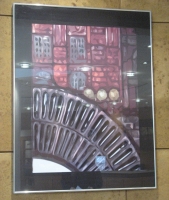 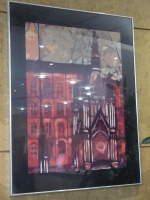 These two different murals were designed for the society’s head offices in Bradford. Our murals were to fill two walls which met at a right angle and could be seen both from the street outside and from within the offices. The longer wall contained a collage of Bradford’s notable buildings, and the smaller those of nearby Bingley. There were a lot of buildings from the time of Victoria when Bradford was in its hey day and we included these in our mural. All sorts of municipal buildings appear including Bradford’s imposing Town Hall, the Library and Cathedral. There are mills: the most impressive being Josiah Salt’s lovely mill building at Saltaire, although it is so long that there was only room for about half of it to appear. We included different terraces of workers’ cottages and in the foreground there are two great glass and iron arches from the railway station. Bingley is more of a small market town and the design reflects this. The famously steep lock system on the canal known as Bingley Five Rise appears at the back of the mural. Important local buildings include the Parish Church, the town hall and the grammar school. There are also wool mills, terraced cottages, bridges over the canal, old wooden stocks and a mediaeval Butter Cross.

It was originally at the head office at 53 Market Street, Bradford, BD1 1LH. When the society moved its head quarters the murals were moved to the restaurant area of the new offices at Crossflatts and then in 2009 moved to an atrium.

We have been sent some images showing that the mural has inspired some digital image versions of it which are found in areas of the Crossflatts offices (last four images above.) We love the new interpretation of this mural and hope we might find more examples of Philippa's other murals done in a similar way.