Bradford & Bingley sold the branches to Abbey National which in turn became Santander. We would love to hear from anyone within the past or current banking groups if they know anything about the whereabouts of this mural. The yellow marker is loosely placed on South Kensington as we don't have any details about the exact location of where this mural was. 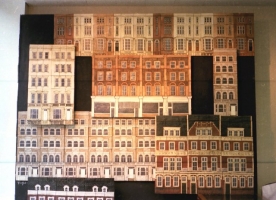 The architect for this project liked the idea of our mural having a more sculptural feeling. We analysed out various typical Kensington houses, which in repeat became terraces. Each individual terrace was mounted up on a wooden board and these in turn were attached to the back wall at different distances from the surface. This gave an interesting three dimensional quality that the architect desired.