Buildings and Artifacts of Exeter 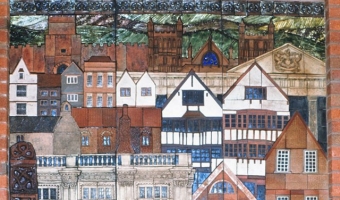 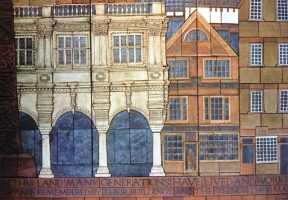 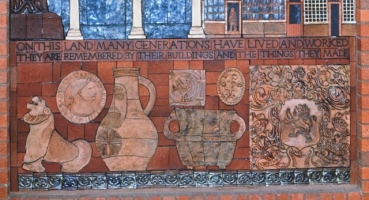 We were asked by Laing Development to design a mural for their new shopping mall based on the Guildhall site in central Exeter. The mural was to include a depiction of the splendid facade of the 16th century Guildhall with its porticos and richly detailed surface. Exeter Cathedral is a towering presence in the city but we were asked not to let it dominate the mural. The concept was to encourage people to think about the long history of this particular site. Just two towers from the cathedral appear in the background, suitably muted. We found images of shops and housing that had been on the site in earlier times, and integrated these with a remaining mediaeval chapel and the still existing Guildhall. The bottom half of the mural contains images showing a selection of artefacts that have been found on the Guildhall site over the years. I modelled in relief images of 17th century pottery including a ‘bellarmine’ jug, a coin, a tile with a crowing cock image and a wooden block used to stamp identity on sacks of wool. We wanted to find a quotation which explained that we can learn much about the past by searching for what previous generations left casually behind. We could find nothing that said exactly what we wanted so in the end made up the quotation ourselves: “On this land many generations have lived and worked. They are remembered by their buildings and the things they made.” This is engraved into a band of ceramic which runs across the mural. The mural was opened by Princess Alexandra in 1975 and for many years appeared on the cover of Exeter’s city guide.