Morecambe Bay in the 19th Century

Current Status : It was gifted to the RNLI in 2001 and has since hung inside the Morecombe lifeboat station. 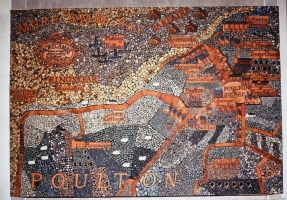 This was an attempt to combine our new fascination with pebble mosaic with a 'map'. We enjoyed making decorative maps in the idiom of 16th and 17th century map-makers, where all the houses are seen in elevation, and the streets in plan. But no one made a map of the Morecambe area in the 17th century! So for this purpose we took an early 19th century map and, following the street plan, inserted little houses where the map’s conventional blocks had represented buildings. In the 19th century the railway had yet to come to Morecambe, the harbour had not been built and it was still a picturesque fishing village with the name of Poulton-by-the-Sands. We depicted notable contemporary houses and rows of workman’s cottages, setting them amongst formalised fields made up of different aggregates. Morecambe Bay was formed from pebbles collected in the bay itself. In the bay we placed decorative prawns and images representing fishing balks. Balks were wicker fences arranged in a V shape to trap fish as the tide receded. Lettering engraved into terracotta roads and tiles described the different features. Originally this mural was located in the Bradford & Bingley branch in Morecombe. This subsequently was taken over by Abbey National which in turn became Santander.

The trail for finding this mural went cold until we recieved an article from the Lancaster Guardian dated 8th March 2018 which mentioned this had been moved to the Morecambe lifeboat station.