Current Status : Mural still there in 2014 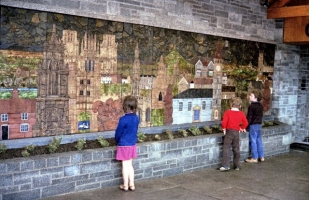 C & J Clark, the shoe manufacturers have their headquarters in Street in Somerset. Kennedy first came to Somerset to work for the company and remained with them for eleven years, until he joined me in our business designing and making murals in relief ceramic. In the seventies, Clarks were involved with a shopping development in central Street. This pre-dated the later and much larger “Clarks Village” which became one of the first and foremost factory shopping centres in the UK. Clarks asked us to design a mural to go on a long wall at the entrance of the new shopping mall. We had recently completed the Sussex mural, depicting many of the famous and typical buildings of Sussex. We decided to do the same for Central Somerset. As always we set about researching for the design. This meant travelling about the county taking photos and doing drawings of buildings and features that might be incorporated. It is always a slow process from first concept to the client’s approval, but the design was eventually accepted and we could start work. The concept was to imagine that the observer seeing the buildings of central Somerset spread out in front of them from left to right – north to south. Starting with a bench end from Brent Knoll and houses from the villages of Axbridge and Wedmore, the mural features buildings from Wells, Street, Glastonbury and Somerton - down to Burrow Mump and Sedgemoor. At the right hand side sits a basket maker from Athelney in the Somerset Levels with his cane work. The whole mural was united by the Somerset levels running along in the background, and a sky made up of softly coloured Cornish slate. Somerset provided a wonderful variety of architecture with which to work. Simple brick cottages contrasted with richly ornate mediaeval buildings. Modelling the west front of Wells Cathedral was something of a challenge. Street (the largest village in the UK) features importantly in the mural as befits the fact that Clarks were the patrons. The terracotta bear finial from the Bear Hotel, Quaker Meeting house, original main offices and landmark clock tower all appear. The clock shows the time at eight o’clock because Kennedy wished to record that in his days at Clarks he had to appear for work by that time in the morning! I drew a key so that the buildings could be identified, and this was produced to go with a postcard.