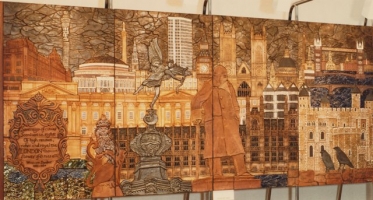 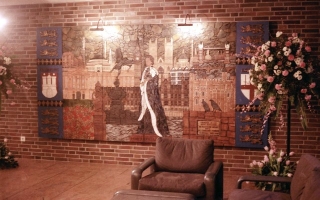 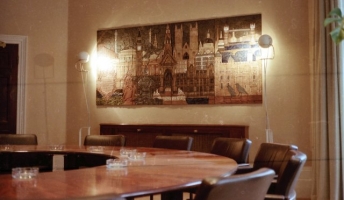 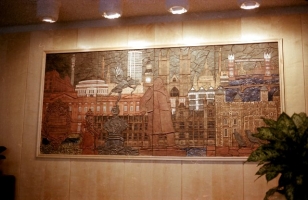 Since we first went into business together, Kennedy had been working out techniques of reproducing our work in editions. Artists have always done this: sculptors have bronze casts made of their original piece, printmakers work with etchings and lithographs to produce limited editions and painters have traditionally had engravings made of their work. He was determined that somehow our very labour-intensively modelled medium could be made more accessible and affordable. So Kennedy, an inventor and always interested in technical challenges, worked out various original methods and we began to make repeating panels. To make these, clay was impressed into the flexible rubber patterns which Kennedy had taken from my intensely worked original pieces. The panels then progressed just as normal, with each one being separately glazed, fired and assembled into its resin backing. It was still a labour-intensive process, but with the modelling stage cut down so greatly it was more feasible to produce panels for the market. For several years we sold panels in limited editions through Tile Mart in Portman Street and through various exhibitions all over the country. In the late seventies, we were approached by an agent who had offices in Cork Street, London. He was not an artists' agent as such but conceived the idea of working with us to produce some work which he could promote using his marketing skills. With this new challenge, we conceived the idea of designing and making a whole mural that was repeatable. We designed a mural based on the famous landmarks of London. A cartouche containing some lines from a 16th century poem by William Dunbar appeared in the foreground: Sovereign of cities Seemliest in sight Of high renown, riches and royaltie LONDON thou art the flower of cities all! There are images based on a lion (one of the Queen’s beasts), the statues of Eros in Piccadilly and of Churchill in Parliament Square. Various other London buildings and landmarks appear in relief. Kennedy made flexible patterns of my original modelling so that the buildings could be reproduced and we made careful notes so that we could glaze the pieces consistently each time that we made up a new edition. Nevertheless there are variations when making and glazing takes place, meaning that each mural is essentially an individual piece. We had liked the use of slate in the sky areas of our building murals but did not want to have to assemble this each time. We evolved a way of glazing the ceramic pieces in the sky to give rich grey-black tones reminiscent of natural stone or Welsh slate. Over the next two or three years the agent sold on our behalf about twelve different editions of the “London Mural.” We didn’t always know where the murals were to go but they went to sites all over London: the London Tourist Board, a hotel, various offices, a directors’ board room and the entrance hall of a new block of apartments. Others went overseas. One went to a German bank, Freddie Laker of Sky Train fame had one for his New York offices, and others went to offices in San Francisco and Hong Kong. The medium is flexible and we were able to adapt the murals to the wishes of particular clients. For the German clients we changed the statue of Churchill for a figure representing the Queen. Another client wanted him replaced with the Albert Memorial. I think we altered, at Freddie Laker’s request, the time on Big Ben to represent the time that his planes arrived in New York. It was an interesting series of murals but nearly always lacked the fascination and rewards of working for particular clients and specific sites.