Current Status : We had some correspondence in 2008 with a person who was PR manager for ARC. He remembered the mural but was aware that the offices at Stanhope Gate were completely renovated after ARC left. The Westminster planning records show that apart from the façade the building was essentially demolished and rebuilt. We are pretty certain that this mural was destroyed.

In all likelihood, this mural was destroyed, but it remains with a yellow marker just in case someone did rescue it at the last minute. We would love to hear from them or anyone who might have seen it. 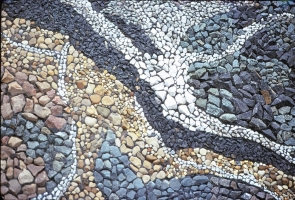 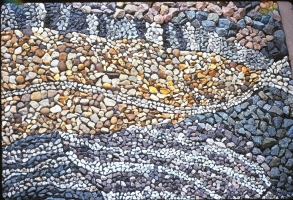 Amey Road Stone had quarries all over the country. They commissioned this mural from us, to be made up entirely from their aggregates. They provided the chippings in various sizes and from many different quarries. Only a startling white aggregate called Arklite, imported by the company from Norway, did not come from the United Kingdom. In addition to quarries, the company had gravel pits and provided sacks of pebbles for us to use. The soft muted colours of natural stone are wonderfully subtle. Together with the soft brown coloured pebbles we had in our palette the buffs and greens and greys of the chippings. The different sizes of aggregate could be used to define different areas whilst the harsher qualities of the freshly cut aggregates could be used to emphasise both texture and tone. The company provided aerial photographs of different quarries which had sweeping abstract qualities and I made designs based on these. The different stones and aggregates formed vivid patterns and textures and it was interesting for the company to see their products used in this different context. Amey Roadstone was taken over by ARC and subsequently by Hanson PLC.