Current Status : Been spotted on the Holiday Inn using Google Streetview in May 2015. 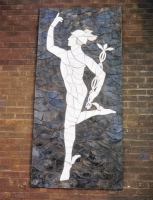 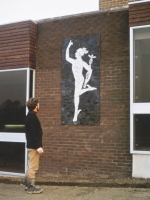 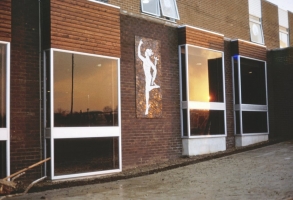 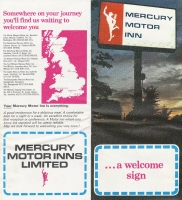 In 1973 we were approached by Mercury Motor Inns – at that time an expanding chain of motels.

Their logo was a white figure of Mercury on a blue background. If the clients liked the first edition of this then they would commission us to do similar panels for their several sites.

It was not entirely to our taste to reproduce logos (little input of design possible) but it could be a good on-running commission so we accepted it. I modelled up the figure, placing him as I thought on a heraldic dark blue background of rich cobalt oxide.

It was the only piece of work that I ever did that didn’t have immediate approval from the clients. We were told that they were disappointed that the blue was so dark. I told them that the panel with its white figure was designed to carry over long distances to attract the attention of passing motorists!

Eventually they accepted and paid for the panel but further editions were not asked for and that was the end of that.

I have always presumed that the panel would have disappeared long ago, when Mercury Inns ceased operating. In 2015 we discovered the image on Google Streetview - still heraldically reading from afar! It appears to be on the same wall, but now of a Holiday Inn. So it has lasted well….