Current Status : One panel in original location but all others removed April 2009. Philippa saw the remaining panel in 2011. 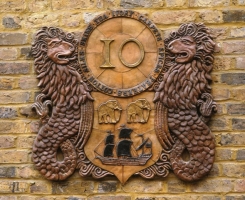 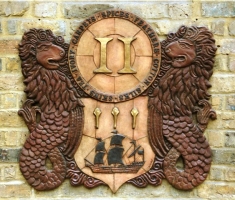 We did several commissions for Standard Life Assurance over the years. This series was for a development on the edge of the City of London. The old East India Company had warehouses between Liverpool Street and Aldgate which were being redeveloped as offices. These were to be known as Cutlers Gardens and were to be sited in both the original brick buildings and other, newly built, marble clad buildings. We were asked to design a series of number panels to identify the different buildings from each other. I based my designs on the original East India Company’s crest. This has two sea lions supporting a globe, together with a ship in full sail. So the design became a cartouche and in place of the globe in each different panel we inserted a roundel with a large gilded number. Around the number we had lettering listing the names of the products which would have been stored in the buildings when the Company was using them as warehouses: tea - carpets - skins - ivory – spices. In the shield beneath we placed a small image of the product. Our terracotta and buff ceramic cartouches, glazed with gold, oxides and lustres, showed up well against both the marble and the brick. The original buildings are very lovely and had been painstakingly restored. Old lifting gear and courtyards were preserved. We really enjoyed working on this project. Recently the ownership of this development changed, and six of the number panels have been removed due to the policy of the new management. One remains in Devonshire Square.