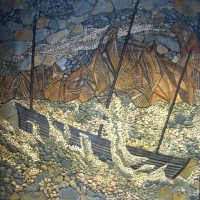 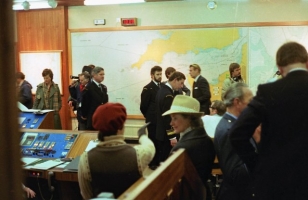 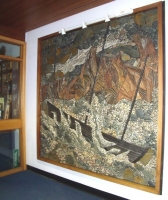 We were asked to design a mural to celebrate the opening of a new coast guard station in Falmouth. We submitted two different ideas, both with ceramic incorporated into a backing of local stone. The architects or developers usually choose the design but in this case it was the coast guards themselves. The design that they chose was based on a ship stricken on rocks with the sea - represented by pebbles and stone - lashing around. We had wondered if this might have been perceived as rather a negative approach! We translated the design into ceramic and stone and both the new building and the mural were both opened by Prince Charles. The mural is still on display. In reply to my enquiry about it they wrote “it still has pride of place in our foyer & is still admired by visitors! The building was opened by Prince Charles in December 1981 (the building is now unbelievably 25 years old).