Current Status : We have had confirmation that the mural is still inside the church as of October 2014. 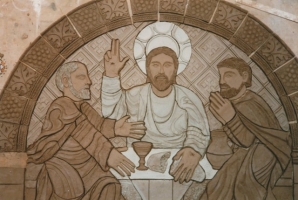 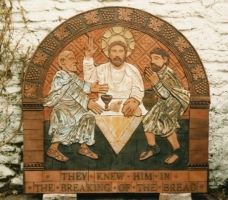 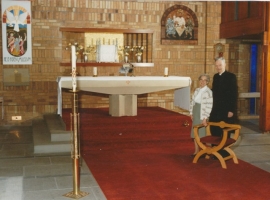 A priest wanted to give a piece of art work to the congregation of his church in Falkirk when he retired. He contacted us and asked us for ideas. We suggested that I designed a panel based on the story of Jesus breaking bread with fellow travellers at Emmaus. This was after Jesus had risen from the dead and it was in the breaking of the bread that the travellers suddenly recognised Him. (Luke XXIV verses 28-32). I wanted the piece to have some of the calm formality of the carvings on a Romanesque capital. The panel is set into an arch with a vine pattern around the top, and shows the figure of Christ sitting between the two men. One starts back in amazement whilst the other puts his hands together in prayer. Inscribed beneath are the words “They knew him in the breaking of the bread.”