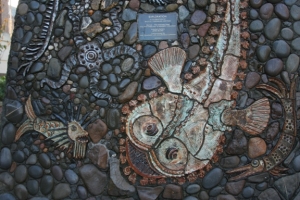 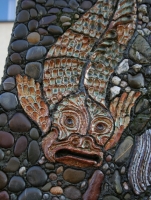 This four sided obelisk is surmounted with a steel armillary sphere made by master blacksmith James Blunt – the whole sculpture standing about 18 feet high. Commissioned by Standard Life Assurance, it was intended to celebrate the mariners who departed from Redcliffe Quay in the 15th and 16th centuries to explore the New World. Men believed at that time that the Unknown deep was occupied by strange and frightening monsters. It was thought by mediaeval men that every animal from the land had a parallel under the Sea. The animals, often half fish, half beast, were based on those which appear in a great contemporary book found in the Chain Library of Wells cathedral. The creatures were modelled up in buff and terracotta clays. After glazing the pieces were embedded into polyester panels with stones and pebbles forming the background. The four panels were then screwed back to a stainless steel framework, and the armillary sphere fixed to the top. Originally the sculpture was designed to have water flowing down each side. However, it is in an exposed position and wind caught the water and sprayed it about, catching the office workers who frequent the space so the water was turned off. The sculpture is floodlit at night time and can be seen across the River from King Street, the home of Bristol’s famous Theatre Royal. It has become something of a landmark itself, reminding the people of Bristol of their unique maritime history.