Current Status : Shopping Centre Manager confirmed that the crest is on the wall in October 2014. He kindly sent us an image of it so we could see it in situ. Mural is located on the wall next to MacDonald's, opposite the Yate Leisure Centre. 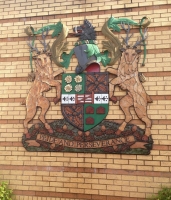 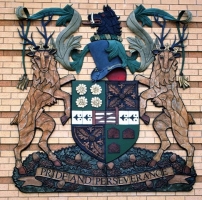 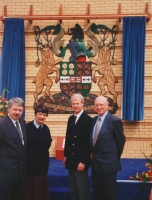 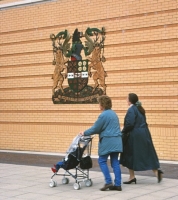 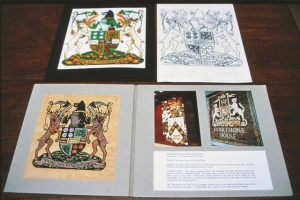 We were asked to design a mural for a new shopping development in Yate, North East of Bristol. The powers that be decided that they would like the town crest of Yate to be the theme. We had worked before on coats of arms and know that at a large scale they can be rather magnificent. Crests are, as it were, a ready-made design but there are always problems as to how to approach the execution. The clients were very worried about vandalism, and our ceramic although robust would not be strong enough to make up some of the shapes associated with this particular design. We worked in co-operation with our colleague James Blunt, the master blacksmith. He made the magnificent helm with its free flowing ragging together with the antlers of the two stags that rear up on either side of the crest. The iron work gave an exciting three dimensional quality to the whole. He also made the large flat shield in the middle onto which we were able to bond the heraldic detail. After some years the site of this mural was to be re-developed and the space taken by the crest was needed for shop windows. It is now in storage awaiting a new site. There is an ideal site on the opposite side of the square, but this is on the Library which is owned by Gloucester County Council. Apparently, they are reluctant to have Yate’s town crest on their walls.