Men at Work in the Royal Forest

We were asked to take these down to go into storage but we have not heard what has happened to them since. We would love to hear from anyone connected to the council or residents of Yate who might know of its whereabouts. 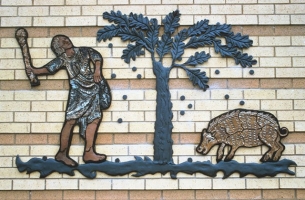 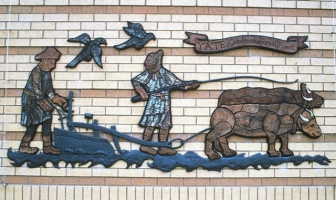 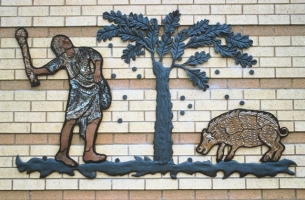 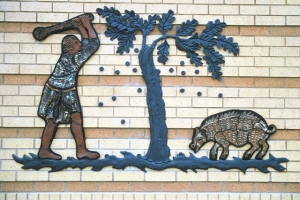 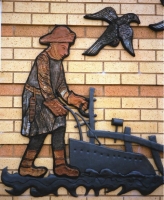 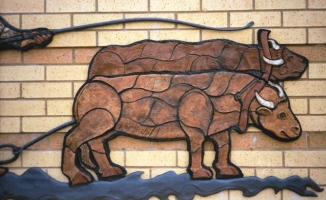 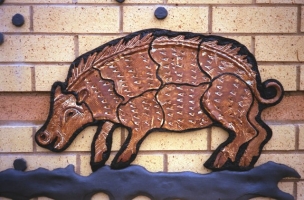 We were commissioned to design and make panels to run the length of a long brick wall on a building which faced the car park of Yate’s new shopping development. We learned that Yate, now a suburb and dormitory town of Bristol, has its name because it was once “Gate to the Royal Forest.” We decided to develop this theme, and found a good mediaeval reference from which to work. The 14th century Queen Mary’s Psalter has charming and detailed drawings at the bottom of many of its pages, depicting life and work of the times. Everyone was very worried about vandalism in this exposed area and we were asked to make the mural particularly robust. To this end, we worked in co-operation with our friend and colleague master blacksmith James Blunt. For the central scenes I based the design on a drawing of men ploughing with oxen. James made the plough in metal whilst we made the men and oxen out of glazed ceramic. On either side of this we had images based on an illustration of men beating oak trees to release acorns for their pigs. The pigs and men were made of ceramic and the twisted and free form oak trees were forged in metal by James. The building was re-developed some years later and the spaces taken by the mural panels were needed for windows in a new MacDonald’s restaurant. The panels are at present in store awaiting a new site.