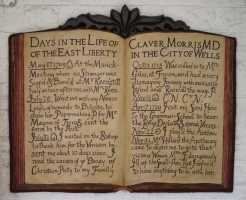 Wells Library was building a new extension and Kennedy and I wanted to give them the present of a panel to go in the entrance hall. This was to acknowledge the fact that over many years the librarians had given us enormous help in our research. Before the internet became a tool of research, libraries were absolute essential to us and we had many helpful sessions with long suffering assistants extracting images from the Library’s extensive resources.

Claver Morris was a doctor who lived and worked in Wells in the eighteenth century. He wrote a frank and animated diary and I extracted various sentences out of this to make up the double pages of the ‘book.’ It was fun to do: he was often rather indiscreet and also he had a code which he used to shorten the day’s recording - for instance a small house meant that he had spent the day at home..

I made a giant book up in clay of which Kennedy made a mould. From this we made a fibreglass cast and I painted on archaic lettering to represent two pages of the diary.

We took another cast of the same 'book’ and wrote details of our work to advertise our studios. This is hanging outside out studios.