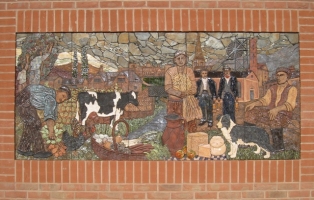 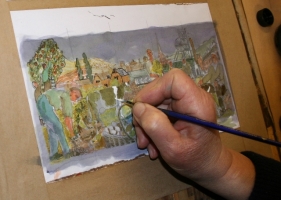 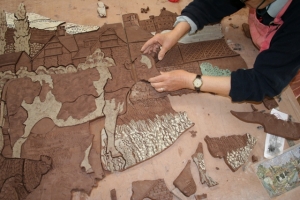 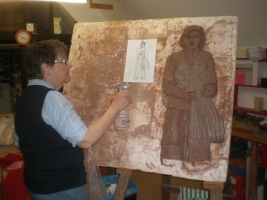 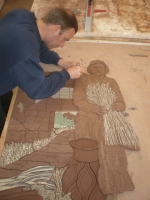 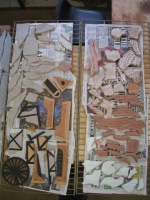 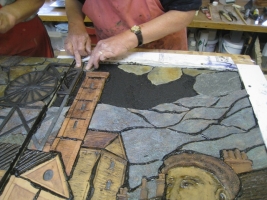 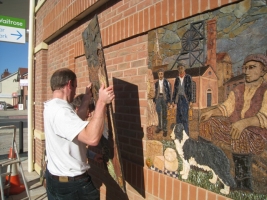 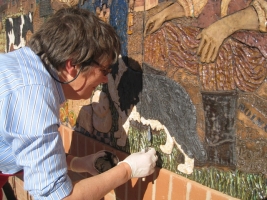 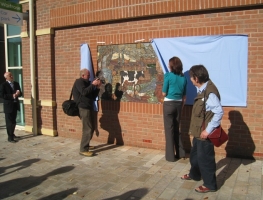 We were approached in late 2009 by the architect responsible for a new development in Poynton – a large village in southern Cheshire. His clients, Waitrose, were to have a mural on the wall of their new supermarket and he sent me a drawing of the kind of thing that they had in mind. The medium was (I think) unglazed brickwork carved in bas-relief and the sketch depicted organic fruit and vegetables together with an old farmer (puffing a pipe!) a recognisable local building and a rising sun. I submitted a design which developed these themes... but I heard that the local Council and Civic Society were by now involved, and were keen to have reference to the mining traditions associated with the area. Poynton had several active coal mines right up until the 1930s and buildings still exist that reflect this. How could the mural combine a romantic agricultural bygone age with the gritty facts of a mining past? The final design shown here is the result of many drawings, letters and phone calls as the architect interfaced between me, Waitrose and the various representatives of Poynton. To the left I have included different agricultural activities – all as I perceive set in about the early 20th century – together with a farm house, farm animals and various kinds of local produce. Poynton Hall , a local Victorian magnates imposing castellated mansion long since demolished, appears is on the skyline Towards the right of the design are elements of the area’s mining tradition: buildings past and present include the canal bridge and pithead winding gear and two miners with their lamps walk down a roughly surfaced street. An old man sits to the side wistfully contemplating the past. He is accompanied by his collie dog. I liked the idea of a dog appearing in the mural and hope that small children coming shopping with their mothers will want to stroke him. My design was finally accepted in February 2010. In June the modelling was completed and by August all glazing was finished. The mural was installed on a glorious sunny day on 11th October 2010.