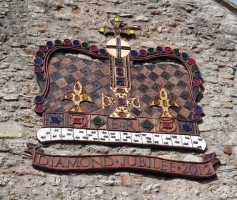 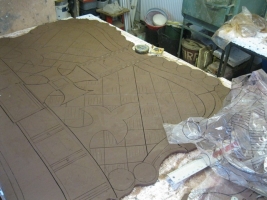 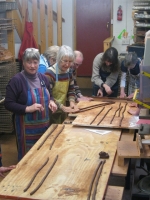 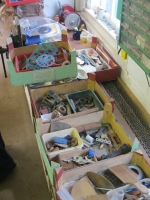 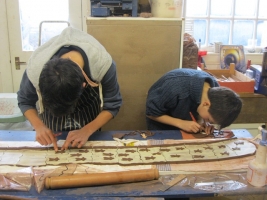 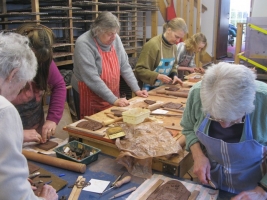 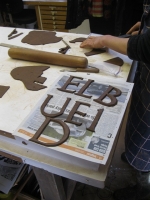 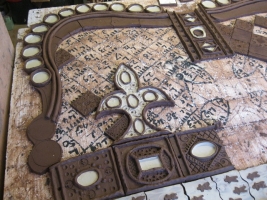 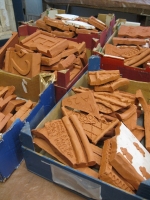 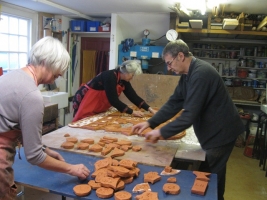 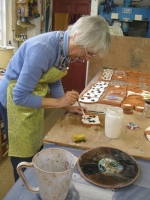 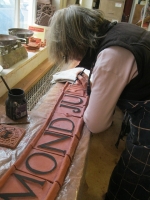 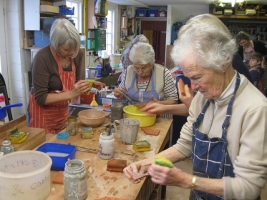 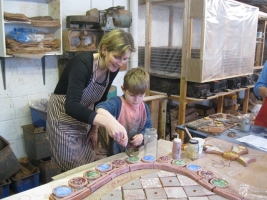 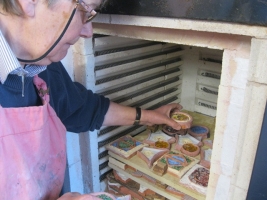 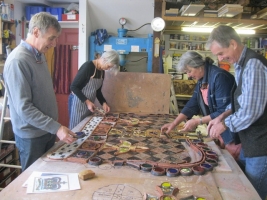 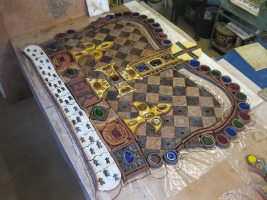 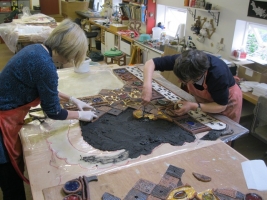 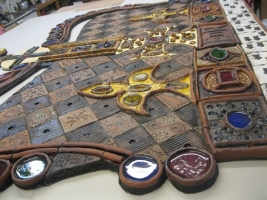 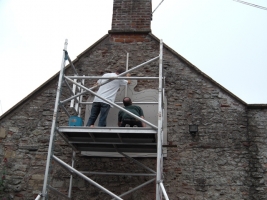 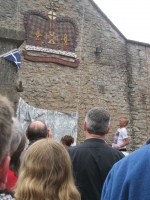 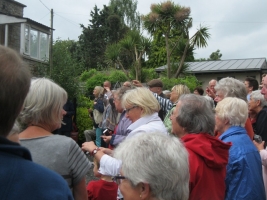 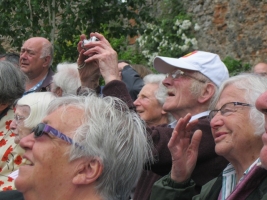 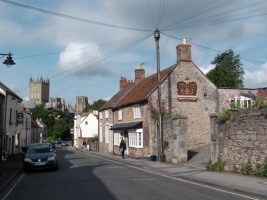 As the community of East Wells were planning celebrations for the Queen’s Diamond Jubilee in June 2012 someone asked “But couldn’t we make something a bit more permanent?” Philippa Threlfall and her son Daniel Collings run the Black Dog studios in East Wells and Philippa volunteered to design and direct the making of a mural in ceramic – or ‘mosaic’ as it came to be known. The owner of a lovely mediaeval house in St Thomas Street generously gave consent for this to be sited high up on the gable end of his house and planning permission was eventually obtained. The result: there is now a permanent celebration of the Jubilee in the form of a giant crown in modelled and glazed terracotta, made by the inhabitants of East Wells. Over a number of weekends Philippa ran a series of workshops and different groups of local inhabitants learned how to work in clay. About forty five people in all worked on the mural in its various stages. All ages were involved, from senior citizens (one of the older ladies arrived in a taxi because she couldn’t walk to the workshop) down to children of six and seven. Everyone was given a particular piece of the crown to make: the jewels, the ermine and the pattern on the velvet background.....the fleur de lys, the golden orb and cross and the lettering on the ribbon which runs beneath: DIAMOND JUBILEE 2012. The clay was modelled, built up with coils and textured as people learned how to use the huge variety of tools that Philippa has in the workshops...cogs, combs, buttons, chop sticks, Lego, necklaces..... When all the modelled and decorated pieces were finished, they were reassembled into the crown shape. A tracing was made of the design and following this a group of locals numbered each of the 245 pieces on the back. These were in turn dried and fired ready for glazing. More people (sometime the same, sometimes different) came to more workshops and learned how to apply glazes. The children added crushed glass to the jewels with their built-up rims, learning how the glass will melt in the kiln and flow into glorious rich colours. Glaze was poured, painted and dribbled onto the clay pieces and often in turn rubbed off again to emphasise the textured surfaces. The lettering was carefully painted with manganese oxide which would eventually become a rich vitrified black. The glazed ceramic was all fired again and then reassembled by the numbering team. Over the next days, Philippa, Daniel and Anne Collins from Black Dog put the pieces into a series of panels of polyester resin and fibreglass – this specialist job could not be done by the local teams. On Friday 1st June, just before the Jubilee weekend, Daniel and a local helper climbed up a borrowed scaffolding tower and fixed the panels back to the ancient wall of the mediaeval house. Plenty of screw holes were needed to allow for the fact that not all the fixings were sufficiently stable. A cunning system covered the mural so that it was not revealed until the right moment. On Sunday, June 3rd, after a celebration lunch for the congregation of St Thomas Church and parishioners, everyone walked down the street to the Unveiling. It was unveiled by the oldest lady (95) and on behalf of the youngest baby (2 weeks). The mural was there at last for all to see. The bold design and rich colours of the crown show plainly but not brazenly on the old stone wall. It has excellent viewing distances and as one approaches Wells from the East. The inhabitants of East Wells can be proud that they have contributed towards a memento of Queen Elizabeth’s sixty years on the throne which will be there for very many years to come.