Current Status : A series of seven panels depicting the history of Theobalds Palace in what is now called Cedars Park 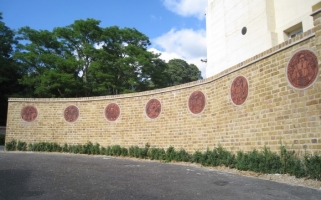 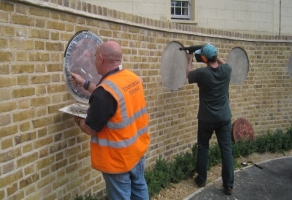 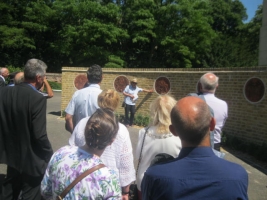 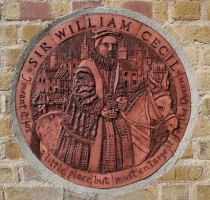 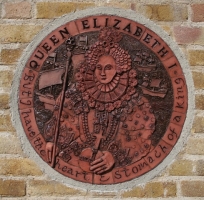 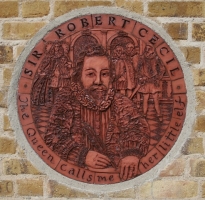 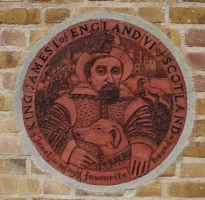 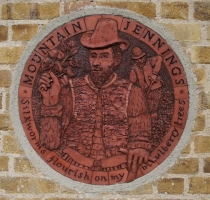 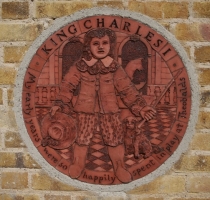 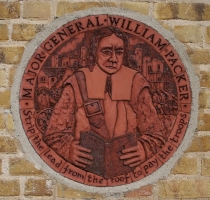 Theobalds Palace was built by William Cecil during the reign of Queen Elizabeth. He originally intended it for his son Robert, but the Queen liked it so much that she stayed there at least eight times. Cecil wrote “I only meant it for a small place but must enlarge it for the Queen”. William’s Son Robert Cecil who inherited the house was a very clever man; he was also both a hunch back and diminutive in stature. The Queen was fond of him, and referred to him as her little pygmy or elf. “The Queen calls me her little elf.” The ownership of the house passed from Robert Cecil to James 1st who often used it as a country seat and hunting lodge. The King was very fond of a hunting dog called Jewel and he appears in the roundel with his dog Jewel: “Jewel was my favourite hound.” Because James was interested in developing a silk industry in England, mulberry trees were planted at Theobalds. Mountain Jennings, the head gardener, is shown claiming that silk worms flourished under his care. ”Silk worms prosper on my mulberry trees” James’s son Charles grew up at Theobalds. The young prince is shown at play with his small dog. He stands in front of a rocking horse, which still exists, on which he is known to have played. ”My early years were spent so happily in play at Theobalds.” Major General William Packer was a religious radical in Cromwell’s army, After the Civil War and under his command, the lead was stripped from the roof of Theobalds and by the end of 1650, the house was largely demolished. ”Strip the lead from the roof to pay the troops.” The house had lasted for less than one hundred years.