Our medium is amazingly tough and permanent and has proved over the years very resistant to vandalism. However, from time to time murals are re-sited and need some repair work.

Peoples Who Used the River at Greenwich was up for about thirty years on the outside wall of the Greenwich District Hospital, facing Deptford High Street in South East London. It was good that there was sufficient support from local groups and TACS (the Tile and Architectural Ceramic Society) to save the mural when the hospital closed in 2003/4 and the building was demolished. 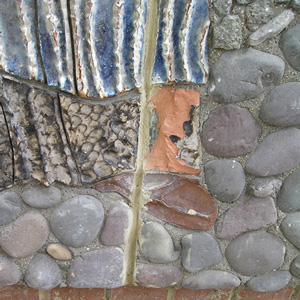 The concrete blocks with the ceramic and stone cladding were carefully removed and re-sited in a small park opposite. There was remarkably little damage after all those years. I had only to replace about six pieces of ceramic - and this in a mural

Having taken photos and careful measurements, I modelled up new pieces of ceramic which were 10% larger to allow for shrinkage in the kiln. I can readily identify the particular glazes that I used. The substitute pieces were placed back into the mural using a resin mastic. A few stones were replaced and lime mortar in the new joints (to the right) was cleaned away. 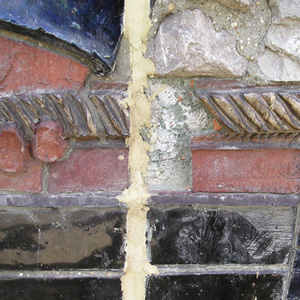 In early days Kennedy and I hid the screw heads underneath actual pieces of ceramic. When workmen were taking down a mural they could cause considerable damage as the fixing points were not obvious. The Mediaeval Plymouth mural was a case in point where there were many pieces broken and lost when it was taken down and kept in store. 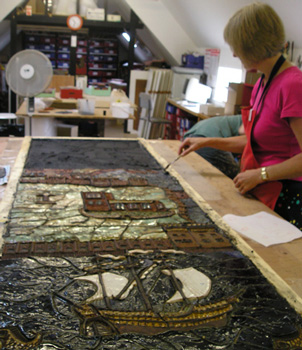 The mural panels were returned to our studios and I remade and re-glazed about 30 pieces of ceramic to match in with the original glazed and modelled surface. To the left you see us working in our studios on the flat panels. The renewed ceramic pieces are being integrated back into surface of the reinforced and restored fibreglass panels.

The mural was returned to Plymouth and fixed back in its new position in the new Drake's Circus development.

When the Buildings of Stroud mural was taken off the wall, the five panels were stored on their sides and over the months became warped and distorted. Our first problem was to correct this, which we did by gently heating the panels and placing weights on the surface as they cooled.

We then laid each whole panel into a new reinforced layer of fibreglass and polyester resin. As always, I was able to match the modelling and glazing when replacing damaged pieces and the few new pieces of ceramic were integrated into the mural's surface, as seen here to the right. 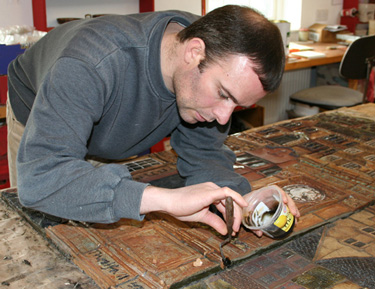 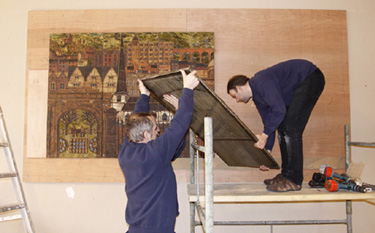 After restoration in our studios the panels were strong and flat. Daniel, who was not born when the mural was made in 1972, came to the site with Philippa and they fixed the panels back to the wall in January 2009. Here two workmen help to lift a single panel into place. Puzzle: spot the second workman!

Philippa is seen working over the surface of the mural. Over the years we have amalgamated a number of stains, glazes and mastics which can be used to add finishing touches.

Originally situated out of doors, the mural was embedded into a brick wall. It's new position indoors allowed for a wooden frame to be added to protect the edges. 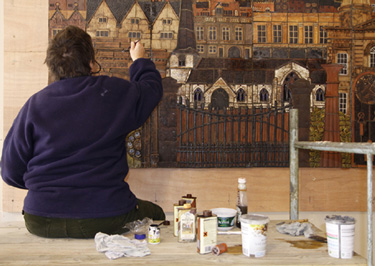