London in the 16th Century

Current Status : We were contacted in January 2019 by a developer who bought both panels for a project but found they were not suitable. These panels are now looking for a new home. The panels are currently in storage. 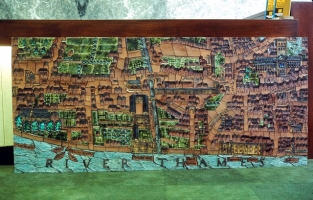 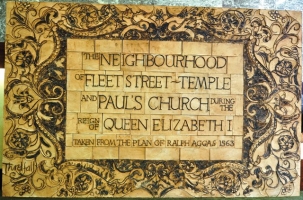 The design consisted of two different panels which were to go in the window of the Bradford & Bingley offices in Fleet Street. The main one was based on a famous 16th century map of London by Ralph Aggas. The second of the panels was placed on the ground in front of the map and took the form of a descriptive panel: writing explaining the map was surrounded by a contemporary cartouche based on a book title page. Both map and description could be seen clearly from Fleet Street by the passers by. Ralph Aggas used the typical early convention of map makers of his time, depicting houses and buildings of note in elevation whilst showing the streets in plan form. In the map, the ‘Fleet Ditch’ which is now culverted is shown as a stream, Blackfriars Bridge was still to be built and St Pauls church as shown is the building that was to be destroyed in the Great Fire of 1666. The fire radically altered the face of this area of London, but many street names and points of interest survive. The whole mural is made of textured and impressed terracotta, whilst the cartouche beneath is made in turn of buff ceramic, the engraved calligraphic lines picked out with metallic oxide.