Current Status : In October 2014 the mural is safely back at the Black Dog studios in Bath where it is on display in our shop. 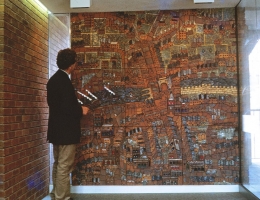 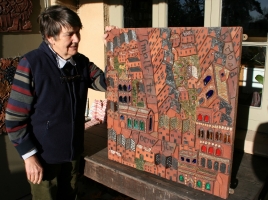 Laing Development asked us to come up with a design for a new office development in the very centre of Bristol. This was to be called Froomsgate House: it is built on the site of the medieval Froomsgate, which has been long since demolished. The River Frome used to flow through central Bristol and join the harbour area in the centre of the city. In the 19th century, the river was culverted and the centre was filled in. Roads and grass areas, the Hippodrome and offices stand where once sailing ships were tied up to the quay. All the original waterways, roads and buildings of old Bristol were recorded by James Millerd in a detailed map first published in 1673. As in many maps of that period, all the buildings are shown in elevation whilst the streets, clearly named, are shown in plan. We took the area of the map which surrounds the old Froom Bridge and enlarged it many times for our design. Heavy bombing in the last war destroyed much of this area. There are still two churches which appear in the map: St Stevens and St Johns, although only the tower of St Johns remains. Lewins Mead and Small Street appear on the map and our mural and still survive, and other elements of the street plan can be identified amongst today’s sweeping modern roads and office buildings. This was the first of several ‘map murals’ that we did. We worked out ways of repeating the houses to give the rhythmic patterns of the original. We melted coloured glass to add richness to the church windows, and rubbed oxides into the incised lettering so that the names of streets and buildings could be clearly read. When the offices were built it was envisaged that there would be a walkway for pedestrians linking various different buildings at first floor level. The plan never worked out so our mural is strangely placed not at ground floor level but up on the building’s first floor, where it was originally intended the main entrance should be.

In October 2014, Black Dog rescued this mural about a week before it would have been destroyed during the refurbishment of the Froomsgate building. The construction company undertaking the work were thinking of trying to save it but were unsure how it was fixed to the wall. They thought up a number of ways to remove it which probably would have resulted in doing a fair bit of damage to the panels. Some inside knowledge from us meant we could take it down without much trouble.