Current Status : In December 2014 we successfully rescued this mural from Washington House (or City Wharf as it is now known) before the building is to be demolished early in 2015. It is in excellent condition after 40 years but it does need a few small repairs. It is now back at our workshop in Wells. 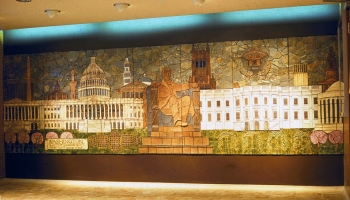 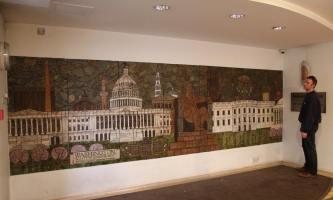 We made this mural for Laing Development, who commissioned several murals from us over the years. The concept was that there were to be a series of large office blocks built at the edge of Manchester. Each one was to have been given the name of a different capital city, and we were to make a mural for the entrance hall of each building. Washington was to be the first. Normally we liked to visit the area/town/city on which we were to base our design but this time we had to work from references. It seemed that all the buildings were in similar pale tones and I found it difficult to make the tonal and textural variety which I had enjoyed with other building murals. We were told that we must incorporate the pink flowering cherry trees for which Washington is apparently famous in spring time and the statue of Abraham Lincoln has a central place in the mural. The office building together with the mural was opened by George Brown who was at the time a (somewhat notorious) deputy leader of the Labour Party. Soon after this there was some dip in the economy and the scheme of having all those office blocks was dropped. So we never were asked to make murals of all the other capital cities, which was a pity because we were looking forward to the challenge.