Coins of the Realm

Location : Office at May Day Green in Barnsley

Bradford & Bingley sold the branches to Abbey National which in turn became Santander. We would love to hear from anyone within the past or current banking groups if they know anything about the whereabouts of this mural. We don't know for sure where this branch used to be so the yellow marker is placed in an approximate location on the map. We think this branch was located at 22 May Day Green but we can't use Google Street view to reach this area as it is pedestrianised and the Google car never covered it. 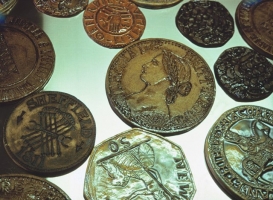 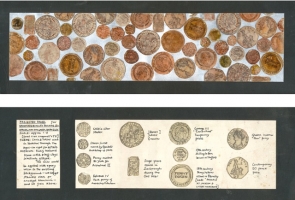 The mural was based on coins and tokens used in Yorkshire throughout the ages. The coins dated from a Celtic silver stater in use during Roman times to a 50 pence piece first struck in 1969. There was a 19th century penny token from Barnsley to make the panel more relevant for local people. This coin is “Payable at Jackson & Listers warehouse, Barnsley” and would have been issued in the 19th century by the mill owners for local use only. Also there was a ‘seige-piece’ from Scarborough. Emergency issues like this were struck by besieged towns during the civil war of 1645. With no proper mint equipment, pieces of silver plate were cut into small bits at random. The glazed ceramic coins were stuck onto a backing of stainless steel.