Current Status : Still investigating a possible sighting of this mural in June 2015.

Recent correspondence with the caretaker of Fountain Primary School (formerly Crosshall Junior School) has suggested that the mural might have gone to a former teacher at Crosshall whose child featured in the mural. 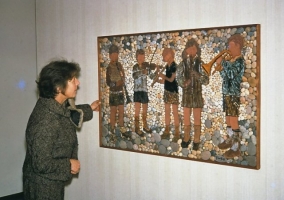 The children of this primary school in Morley in the West Riding had helped to collect the stones for the mural that I did for the Leeds Bradford Airport at Yeadon. (‘Life in the West Riding,’) The head mistress Laura Bradshaw was retiring and decided to commission a mural to give to her school, which had a particular tradition of musical activity. She asked that some of her pupils might be shown playing music. I went to the school and took photos of the children playing their various instruments and these figures became the basis of the panel. Stones formed the backing as in the mural at Yeadon. The children were delighted to recognise themselves in the mural. Many of them must still be about and I would love to hear from anyone who remembers being figured in the panel.

In 2014 we have discovered that Cross Hall JM School was closed in 2005 and amalgamated with Fountain Primary School.