The mural was commissioned to celebrate the 60th birthday of a member of a Swiss family. We would love to know what has happened to this panel. 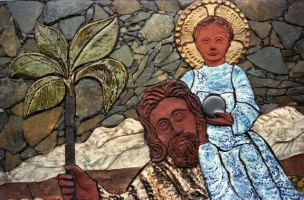 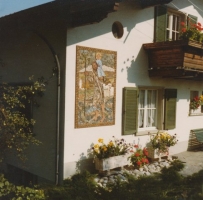 Apparently it is the practice with some Swiss families to give each other a present to celebrate important birthdays. The lady who had commissioned the St Francis mural now wanted to join with her family in giving her brother another of our panels. The subject was to be St Christopher. There was no particular reference this time, and I drew the saint as he carries a small child over the river. The legend tells us that as St Christopher crossed the river the child grew heavier and heavier since the child was Christ and golden ball that he was carrying was in fact the world. My Swiss friends were very particular in their requests. Only fresh-water fish should appear amongst the pebbles which represented the river: “In Switzerland, we have no sea so only fresh water fish...” and they asked for particular recognisable Swiss buildings to appear in the background. I worked from references which they supplied. The halo and world-ball had gold lustre applied after the last normal glaze firing. Gold is more like an enamel and is fired on at a lower temperature, about 800°C. The mural eventually went to Italy where the brother lived but we hoped that he appreciated the authentic Swiss detail.