People Who Used the River at Greenwich

Current Status : Daniel has seen this in 2014 in its current location 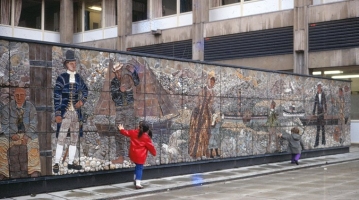 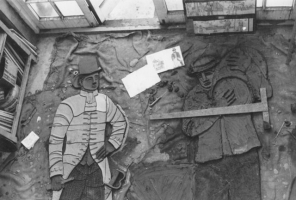 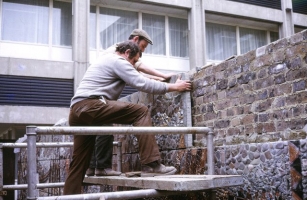 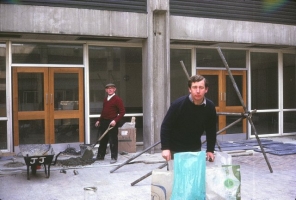 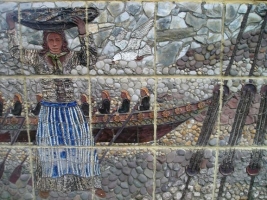 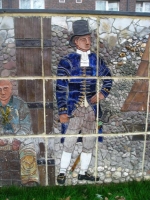 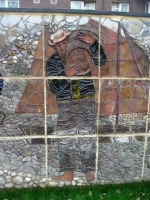 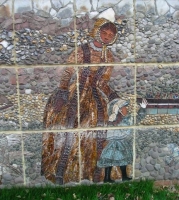 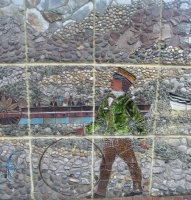 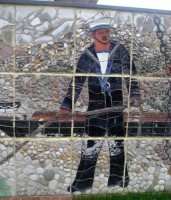 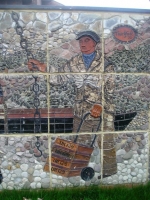 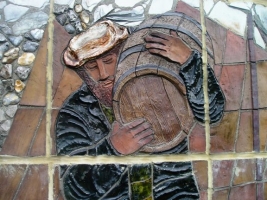 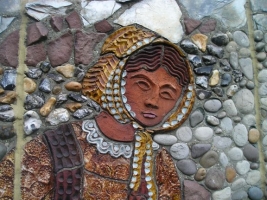 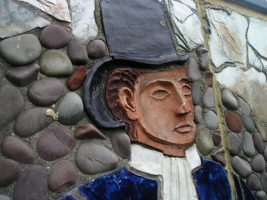 In the late sixties – early seventies, The DHSS (Department of Health and Social Security) planned and built a new prototype hospital to serve Greenwich. We were commissioned to make a mural using ceramic and stone to cover a long wall which faced onto the Woolwich Road. The architect, Tony Noakes, had seen my work in articles in a magazine then highly regarded by the architectural profession: The Cement and Concrete Quarterly. In a subsequent edition of this magazine an article appeared about the mural. The architect wrote: "Greenwich District Hospital is the biggest ever architectural development project undertaken yet a Government Department. ... Between two projecting blocks on the Woolwich Road frontage, a 60' wall was needed to enclose the play garden of the Day Nursery. I was considering this when I came across ... the murals of Philippa Threlfall. She is a potter who has developed a technique of setting coloured stones with glazed and unglazed ceramic in mortar bedding on precast concrete paving slabs. I approached Miss Threlfall, who submitted three designs. We chose one illustrating the maritime history of Greenwich, from mariners to modern dockers. It fulfils its decorative purpose admirably, enlivens the street scene ... and has as Miss Threlfall predicted not acquired 'improvements' by aerosol artists, in spite of an area prone to vandalism. This is the only piece of commissioned art work in this project. Unlike so many of the dutifully provided pieces of abstract sculpture that are so often found sitting self-consciously in front of modern buildings, this mural both stands as its own as a work of art and also achieves a happy integration with the architecture." I wrote: "We worked on precast concrete slabs made by the contractor approximately 2 ft square and 3 inches thick. ... The stones were collected from various sources including aggregates from Amey Roadstone Corporation, for whom we had been doing a mural using their aggregates. We used slate in the sky areas from a worked out Cornish slate quarry, and collected pebbles from beaches in Cornwall, Somerset, Devon and Wales. These together gave us a limited but subtle palette of colour ranging from green grey of some aggregates to the rust and yellow of the Cornish slate ... to the soft browns and whites of Chesil Beach. The ceramic was modelled and glazed in our studio in Wells and the pieces assembled on site like an outsize jigsaw. We were glad that the design had the theme 'People who have used the River at Greenwich' because we felt that it might give a feeling of the history of the river associated with the fine architecture in Greenwich to local people who may have become almost immune to history. The ships, costumes and many of the details were taken from paintings, photographs and exhibits in the Maritime Museum ... The figures shown are, from left to right: eighteenth century courtiers and fish-seller; mariners from the age of clippers and midshipman; a Victorian mother and children, and a twentieth century sailor and docker." The DHSS site architect (not Mr Noakes) was – we thought – a patronising young man. He said on the last day of the three week erection "You had better take your photos today, because you’ll never see the mural looking like this again." This was because the area was a rough one. Whilst we worked up there, plate glass had been pierced with air rifle shot on the day of its installation. But in fact there was never any vandalism associated with the mural. The worst I ever saw was a cigarette butt stuck between the lips of the 19th century Midshipman. The mural was still in excellent condition when the hospital was closed in 2003/4. The site has been re-developed but happily there was local pressure to save the mural. The blocks were transported to a new site in a small park – Glenister Green - across the street. In spring 2007, I was involved in the small amount of repair work necessary and it is good that the mural is now again a permanent part of the local scene.